Canada’s refugee commitment must be maintained: politicians need to step up

The new federal Liberal government led by Justin Trudeau ran in the recent election with a promise to relocate 25,000 refugees by the end of the year. Yet with recent developments such as the terror attack in Paris, a chorus of anti-refugee sentiment has gained strength across the country, as well as here in Newfoundland and Labrador.

In short, I am calling on NL Liberal MPs Judy Foote, Gudie Hutchings, Yvonne Jones, Ken McDonald, Seamus O’Regan, Scott Simms, and Nick Whalen to issue statements, get in the media, and otherwise do your part to inform the people of this province about how this process of relocating 25,000 refugees is going to happen. Especially, you need to answer the fears about security being expressed in the wake of a senseless tragedy.

One expression of this fear is a petition circulating calling on the government to go back on its commitment (I will not provide a link to this petition). This anti-refugee sentiment has also emerged in the province of Newfoundland and Labrador, after Labrador MP Yvonne Jones recently suggested the military base in Happy Valley-Goose Bay would be an ideal place to temporarily house around a thousand refugees.

Even before the attack in Paris, an aspect of the public discourse was concern about the federal Liberal’s plan to bring in 25,000 refugees by year end, for two main reasons:

1) the broad category of “us first,” i.e. there are Canadians or Newfoundlanders and Labradorians who are not getting what they need, so why should we be helping outsiders?

2) security concerns, i.e. how can adequate screening be completed; fear of infiltration by terrorists through refugee intake, etc.

Happy Valley-Goose Bay mayor Jamie Snook tried to address the first of these concerns in an interview with CBC NL. To paraphrase, Snook asked why the community should have a base if it was not to be used in such emergencies, and noted that the base had been used to address local emergencies as well. In a column for the NL Independent, Ossie Michelin also pointed out that there is no reason communities cannot be part of a broader response to the refugee crisis and also work to resolve social issues affecting the community.

One of the better responses to the question of security concerns has come from retired General Rick Hillier (video below) who has suggested that Canada is more than capable of bringing in upwards of 50,000 refugees by Christmas and that an over-emphasis on security concerns is akin to being “frightened of our own shadow.”

Added to Hillier’s views, it must also be said that the idea that ISIS fighters would attempt to infiltrate Canada through such a high-risk method as imitating refugees and hoping to avoid the scrutiny of the security apparatus is illogical at best. Perhaps in Europe where refugees are simply crossing borders this may be worth discussing, but not in the case of the Canadian government refugee relocation plan where refugees will be transported directly to military bases.

However, the people who need to be vocal now, and need to reassure the public, are our elected officials. Liberal MPs especially, such as the seven Liberal MPs in Newfoundland and Labrador, need to get on the radio, on TV, and in the newspapers, to allay the fears that are quickly transforming into anti-refugee sentiment, bordering on bigotry in some instances.

As candidates you ran on a platform that included welcoming refugees, appealing to the broad support-base calling for more to be done, and now you must reassure the public that all care is being taken to make this happen in a safe and organized manner.

To learn more about how you can help as an individual and in your community, visit www.refugeeswelcome.ca

Sign a petition to support welcoming refugees at this link 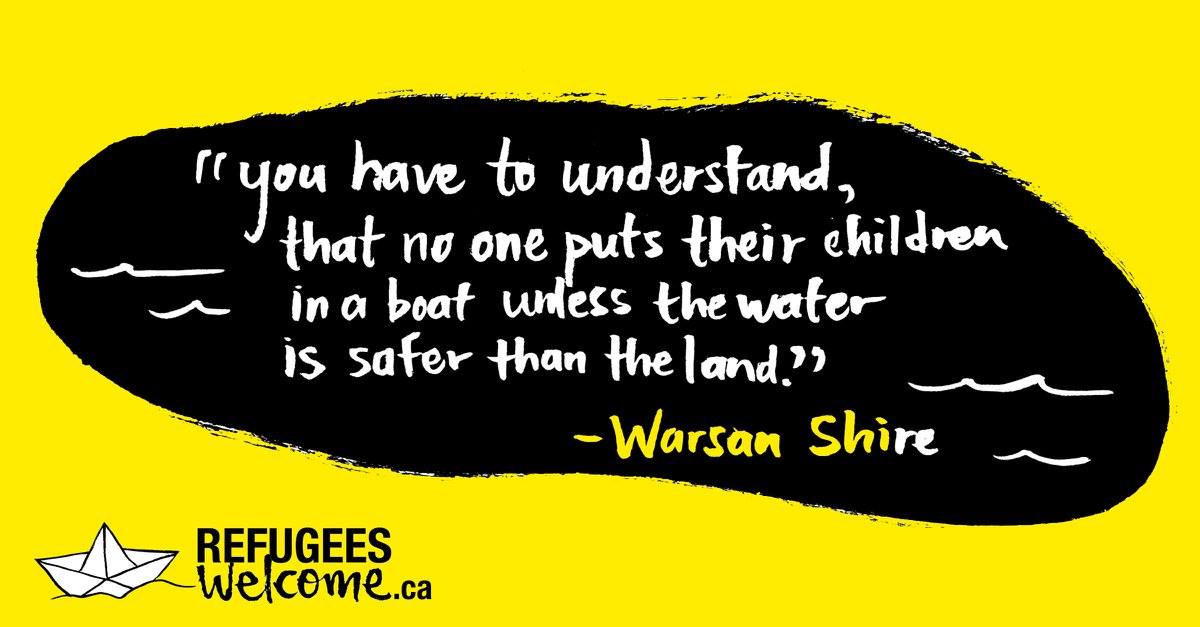