I write journalism for various media outlets, mostly for the The Independent NL. Generally op-eds or reviews, occasionally news pieces, this work often takes up issues to do with provincial, federal, and international politics. I put together a collection of my journalism, speeches, short papers, and polemic in my first book project, Everyday Dissent: Politics and Resistance in Newfoundland and Labrador. 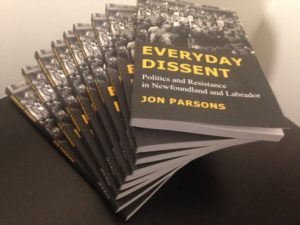 Along with being a writer and reporter, I have edited, proofed, and fact-checked articles for the Indy as well as editing and reviewing for academic journals. I am also in the process of making my first documentary film, focused on protests against the Muskrat Falls mega-hydro project, which is tentatively titled “Muskrat Falls: Power and Resistance.”

Below are links to a few media and journalistic efforts.

Quebec students are fighting for you

The killing of Don Dunphy

The state of democracy in NL

CETA trade deal trades us away

You gotta fight for your right to… sleep? (this article reprinted in The Tyee)