In this post, I offer some details on the recent history of Innu resistance to colonialism, militarism, and industrialism, and discuss how and why (for better or worse) the Innu came to be backers of Muskrat Falls. I draw specifically on statements and writings from Elizabeth Penashue and her son Peter, as well as researchers who worked on the Innu land claim and other theorists.

Much of this post is cut from two different papers, one published in 2011 (available at this link) discussing exploration literature and colonialism in Labrador, the other published in 2015 (available at this link) discussing resistance to extractive industries in the province. I do not claim to offer an exhaustive history or analysis, and encourage interested readers to check the bibliographies of the linked papers for sources.

History of Industrialism and Militarism

In the creation of the Upper Churchill Falls hydroelectric dam in the late ’60s and early ’70s, an area 6,500 km2 was turned into a standing reserve of water energy — what is now called the Smallwood Reservoir. The Innu Nation website says that this “flooded thousands of kilometers of land in Labrador, including valuable caribou habitat and Innu burial grounds. Although the Innu people used and depended on much of this area for centuries, the provincial government did not consult them before damming the Churchill River.” Studies were also conducted on methyl mercury levels resulting from the flooding, showing there were unsafe mercury levels in the water, fish, and other animals, taking decades to dissipate.

Many Innu felt outraged by what they perceived as the mass industrialization of their traditional lands. In her narrative from the collection It’s Like the Legend, Elizabeth Penashue speaks to this point, contrasting Innu land use with what is best characterized as industrial pillaging:

The Innu detest what the governments have done to our land. There has been heavy destruction of our homeland. We have been gentle and loving to our land, and we use it wisely. With the Churchill Falls development, all the animals were wasted away in the flooding…. The governments didn’t look at the Innu way of life. They never even consulted us. All that mattered to them were dollar signs…. In 1984, there were 10,000 caribou drowned in Kaniapishkau…. [Our grandfathers] killed only enough for food.

Penashue also talks about the Labrador logging industry, again contrasting this destructive use of the land with traditional Innu use. “By the side of the road,” she says, “I see piles and piles of wood waiting to be picked up by those trucks. It hurts me so much. Innu people never killed so many trees. We only chop down trees to use to set up our tents … and to keep us warm.”

Along with other women from the Innu Nation, Penashue protested against the NATO presence in Labrador. NATO, with the permission of the Canadian government, used Labrador as a site for military exercises involving low-level flying as well as a testing site for munitions and weapons systems. She describes the scene of the bombing range, saying, “we saw craters … trees were destroyed and bombs were also dropped in the lake. Some of the bombs were huge. The military has only a 40 year history on our land. How can they tell us they own the land? We have thousands of years of history on this land.”

As part of organized protests, Penashue and other Innu occupied positions on the runways and bombing ranges. In her narrative she tells us that the protests were non-violent and no damage was done to military property or vehicles. She compares the Innu protest against the base with “the struggle in South Africa … before the fall of apartheid.” For her trouble, Penashue and her fellow protestors were imprisoned. She was released after a hearing and on returning home decided to organize another protest, the result being that she was once again jailed. “I did this three times,” she tells us. Her feeling, and the feeling of many Innu, is that “if further militarisation continues … there will be no future for the Innu. This land was meant to be used for hunting. This is not a land of war.”

Against the backdrop of this resistance to NATO and to industrialism in their territory, the Innu began a land claim process with the federal and provincial governments. Peter Armitage, an anthropologist from Memorial University, was commissioned by the Innu Nation to conduct a study for this purpose. Armitage’s 1990 report, Land Use and Occupancy among the Innu of Utshimassit and Sheshatshit, relies on both topographic and ethnographic information to validate the Innu claims. In his report, Armitage set the contemporary scene in stark terms:

The script that was written for the Innu was largely not of their choosing, but was imposed on them by an alien people with alien values and language, alien forms of government, land tenure and economic systems. The final act has yet to be performed, but it could well be a tragic one for the Innu unless there are changes in Canadian, Quebec and Newfoundland policies towards them and their country.

Some of the alien people and customs Armitage discusses throughout the report are the Catholic Church, the International Grenfell Association, early settlers and non-Indigenous frontiersmen, the United States and other NATO aligned nations, as well as the Canadian and Newfoundland governments. In his report, Armitage argues that attempts to integrate the Innu people into Euro-Canadian culture have utterly failed, the results of which are substance abuse, family violence, and other social pathologies.

The response to such issues by settler governments has been through things like community relocation, education and rehabilitation programs, and other “humanitarian” interventions. Peter Penashue discusses the misplaced morality of settler society in his article “Killing Us with Kindness,” where he writes:

Newspaper coverage of the social problems we have in Sheshatshiu — the high suicide rate, the gas-sniffing children — blame boredom and isolation. Media in the South suggest that the solution is moving us to bigger communities where there might be jobs. The facts as I see them through Innu eyes are more complex. I share my insights in the hope of a constructive dialogue that will lead you to support us in taking responsibility for our own lives. We Innu view your solution as another chapter in a book that could be titled “They Kill Us with Kindness.”

Peter Penashue is arguing that the attempts by governments to fix the problems in the Innu communities remained a form of imposition of settler values on the Innu. In the lead-up to the vote on the New Dawn agreement, Innu leaders consistently said that the solutions to issues faced by the communities must come from the community itself, and that self-governance was a major component in getting to a place where necessary changes could happen.

In June 2011, the Innu Nation ratified through plebiscite an agreement with the government of Newfoundland and Labrador, the Tshash Petapen Agreement (the New Dawn Agreement), which takes into account land claims and the Lower Churchill Falls hydro development (Muskrat Falls is stage one of this bigger project). The results of the vote were overwhelming: reportedly 98% voted yes in Natuashish; 88% voted yes in Sheshatshiu.

Given the recent experience of the Innu people of ongoing colonialism, industrialism, and militarism, it is not at all surprising that so many voted for an agreement that promised to bring both autonomy and political agency with respect to development in their territory. However, although this agreement seemed to be a progressive step in recognizing the economic, political, and cultural rights of the Innu, not all members of the Innu Nation supported it at the time. In an interview with Jenny McCarthy of the Labradorian, Elizabeth Penashue said she was troubled by the prospect of further environmental damage to the land, and was also concerned by the way land claims were bundled with deals regarding the Lower Churchill.

Peter Penashue, who was elected as the first Innu federal Member of Parliament for Labrador and appointed to a cabinet post as Minister for Intergovernmental Affairs, supported the New Dawn Agreement and the development of the Lower Churchill. His electoral victory and subsequent appointment to cabinet helped move along the land claim and the industrial development. In a May 2011 interview with Tara McLean of CBC’s Labrador Morning Show, Elizabeth Penashue expressed great pride in her son’s election to office, but again reiterated her opposition to development of the Lower Churchill.

This tension between mother and son highlights a divide in the Innu community, but also adheres to the pattern of resistance to colonialism as discussed by Edward Said, who notes in his book Orientalism, “the partial tragedy of resistance is that it must to a certain degree work to recover forms already established or at least influenced or infiltrated by the culture of empire.” In this case, the already established forms are the economic, political, and industrialist models of settler society.

Unfortunately, the New Dawn Agreement and the Muskrat Falls project are looking more and more like another kind of colonialism for the Innu. Being involved in the project in terms of having jobs and business opportunities does not diminish the destruction of lands and contamination of water, and, thus, the further extinguishing of Innu ways of life. I also question the degree to which Innu communities have experienced real benefits from the project in the form of public works, facilities, or other development. There are arguably more hurdles to a livable future now than before New Dawn was ratified.

Many Innu must feel that what is happening is wrong and that they have been betrayed. It is a difficult position to be in, since even if a vote was cast with the best intention of gaining political autonomy for the Innu people, it was also a vote in support of the Lower Churchill project and makes one feel complicit with the negative outcomes. Such complicity, then, makes one less likely to speak out and resist. However, the fundamental question for me is the degree to which the spirit and letter of the agreement is actually upheld by the province and by the companies operating at Muskrat Falls. Do the Innu have any significant say in the running of the project on their self-governed territory? Has the promise of sovereignty been made real? Is the Innu community seeing any real benefits? And many other such thorny questions…

Finally, I think the Innu people should, even now, resist the Muskrat Falls project. It is not about technical issues, and it is not about economic issues. This is an ethical issue, and what is happening is simply not right. The Innu have had, all along, the ability to shut this project down, either through political means from the band councils and the Innu First Nation, or otherwise through the same forms of grassroots resistance employed in the past. This is the eleventh hour and there is only a matter of days before the reservoir is flooded, but it is never too late to do the correct thing. It is just a matter of making a decision and then acting on it. 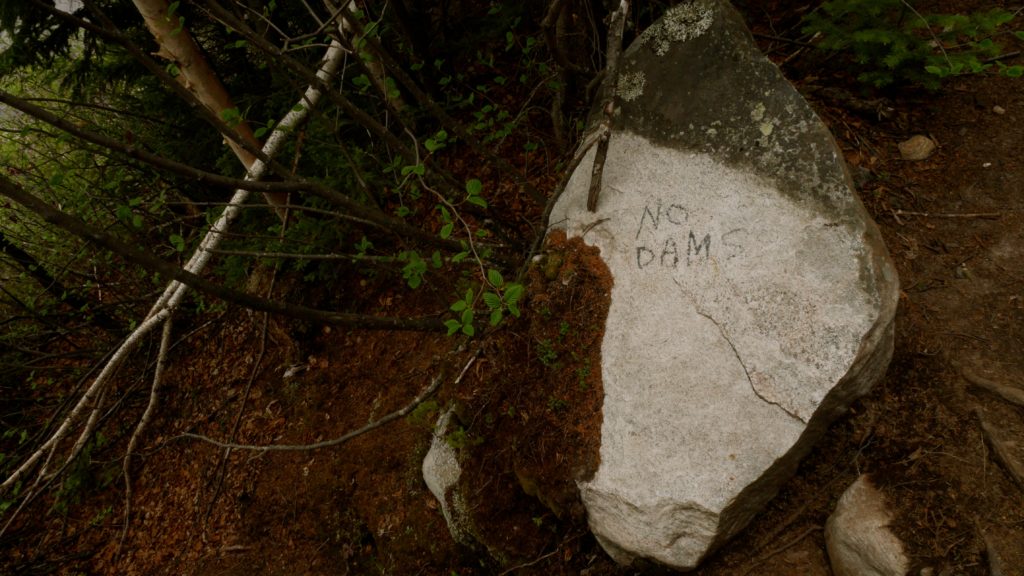