There is a revolt brewing in Newfoundland and Labrador in response to an austerity budget introduced by the provincial government.

The 2016 provincial budget, released on April 14th, has a sweeping set of tax increases, fee increases, cuts to services, and a raft of other costs — including a deficit reduction levy, what some are calling a head tax and which has incited significant anger. Public anger came to the surface immediately following the release of the budget. It was obvious to everyone well before budget day that the province was in a dire fiscal situation; however, a number of factors came together to contribute to an explosion of anger.

Some of these factors include the fact that the newly elected provincial Liberal government, and its leader Dwight Ball, campaigned only a few months ago on a platform of not raising taxes (specifically not raising the HST) and not cutting jobs, both of which are now happening. There are also concerns that the tax and fee increases are regressive, forcing working families to shoulder more than their fair share of the burden. In this atmosphere of betrayal and inequity, long-standing grievances about the Muskrat Falls project, a multi-billion dollar mega-hydro dam under construction in Labrador, have resurfaced and come to the fore. This is only a snapshot of the sources of anger and there are many other specific issues and grievances.

More generally, it also should be noted that after a decade of prosperity, a decade during which oil revenues and Atlantic Accord payments contributed to an unprecedented economic boom in the province, it is a psychological blow as well. The people of the province, which has historically been known as an economic basket-case, were told that “have not would be no more,” a reference to the province no longer being on the receiving end of federal equalization payments. Overall, the pumped up NL nationalism of the past decade makes the return to “have not” all the more difficult to accept.

Just before the budget was released, I wrote an op-ed focused on building broad-based solidarity as a strategy to resist austerity. I noted that the society was fragmented in sectors, socio-economic and otherwise, that had been pitted against one another, and that only by overcoming this fragmentation could effective resistance be mobilized. I noted, furthermore, that “the fragmentation of society and the absence of collective attitudes is something that can very quickly be overcome.”

I had not realized just how quickly that could happen, had not anticipated the swiftness with which a decentralized, grassroots mobilization against the budget and against the government would materialize. I am not positioning this as an heroic narrative of overcoming — the revolt is still in its nascent form — but it would be hard for even the most cynical observers to dismiss the range of possibilities that have opened up that did not seem possible even a week ago.

Two days after the budget was announced, there was a grassroots demonstration and march in downtown St. John’s. There were petitions circulating. There was angry caller after angry caller on local open-line radio. There were emotional and heartfelt letters to the editor from mothers, from people with disabilities, from students. There have been letter writing and phone in campaigns directed at MHAs, calling on them to vote against the budget in the House of Assembly (presumably the vote will be in the next two weeks). Mutual aid networks have sprung up. More demonstrations are planned. Students are rallying on campuses throughout the province. And on, and on… (see link list at end of post)

People are coming together in spontaneous and organic acts of resistance. Something has been awakened in this province, some source of energy and solidarity not used in a long time.

All it will take now is a spark, a catalyst, for this emergent revolt, this uprising, to come into being. 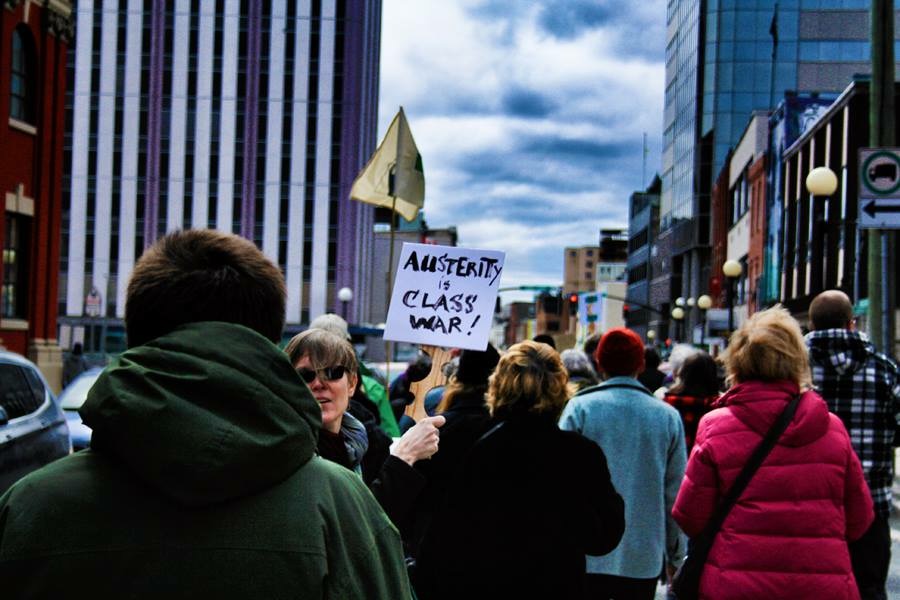 ***call for a province-wide week of occupations and daily protests, May 2-8th***

Government “definitely does have a choice” in NL Budget 2016: economist (News)
http://bit.ly/262GCo3

Is there a democratic alternative to austerity? (Opinion)
http://bit.ly/1M86RD0

Not “Our” Crisis (Opinion)
http://bit.ly/1QHakrW