Media coverage of recent demonstrations in Ukraine provides an opportunity to examine how the same protest can be shaped into different narratives.

To some accounts, what is happening in Ukraine is a mass popular uprising calling for integration with the European Union, while in others it has been presented as a coup attempt organized by external actors. Compare, for example, coverage of the protests in the Russian-based RT News network with coverage in the Canadian-based CBC.

RT, in the lead of a recent article says,

In this story, the number of people involved in the demonstration is estimated in “tens of thousands,” and the number is subtly disparaged since it is suggested the opposition failed to bring out a projected number. “The Million March” is presented as naive and hopelessly unrealistic, and in this way downplays the significance of the protest. Compare this with the CBC coverage in a recent article that estimates the numbers for the same demonstration at 500 000:

Hundreds of thousands of Ukrainians flooded the centre of Kyiv, the capital, to demand [the president] Yanukovych’s ouster after he ditched ties with the European Union in favour of Russia and sent police to break up an earlier protest in the nearly three-week standoff.

This article presents a different narrative, not only in terms of the number of protesters but also in that the demonstrations, while pro-EU, are also decidedly anti-Russian. While both RT and CBC seem to agree the protesters are calling for closer ties with the EU, western media outlets are keen to play up the angle that Russia is the puppet master of the current Ukrainian president. In western media, generally speaking, security forces are portrayed as the resurgent iron fist of the old-school USSR, clamping down on the Ukrainian people, with Ukraine often described as a “former Soviet republic.”

An interesting flashpoint, and one with clear propaganda value, is the destruction of a statue of Lenin in the Ukrainian capital. The CBC report cited above says “Angry anti-government protesters in Ukraine toppled a statue of former Soviet leader Vladimir Lenin in the centre of Kyiv on Sunday and blockaded key government buildings amid huge street protests.” The RT story cited above, on the other hand, does not mention this incident. Not only the CBC, but most western media outlets (at least those I’ve looked at today) highlight this as a significant event, in terms that are reminiscent of the toppling of the statue of Saddam Hussein in 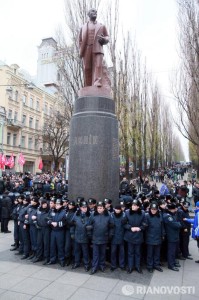 Baghdad in the immediate aftermath of the American invasion.

Statues, buildings, flags, all these sorts of cultural iconography present especially striking means of narrating complex political situations in accessible (if disingenuous) ways. This same statue of Lenin had earlier been significant when images came out of a ring of police protecting it. The toppling of the statue speaks on a symbolic level, saying that the people of the country have rejected any cultural capital the statue had, and by extension have cut ties with Russia in favor of the EU. The fact that protesters have ready access to the statue and were able to take it down says the government (and, by proxy, Russia) are no longer in control of the situation.

The apparent tug-of-war between the EU and Russia provides a convenient dichotomy for media outlets in both the east and the west, allowing sound bites, bylines, and photographs to be easily contextualized and made available for consumption, regardless of what narrative they propagate. But this does little to illuminate the many competing claims and the entanglement of many different desires of the Ukrainian people.

I have a few Ukrainian friends, and they say that to get an accurate picture of the political landscape requires an awareness of the history of the country going all the way back to the 13th century and the invasion of the Mongol Golden Horde. They say the Ukrainian people are fiercely independent, but have no illusions about the relative nature of independence — freedom is often a matter of perspective. They say that more than anything the people of Ukraine are sick of being cheated and manipulated by a self-interested and corrupt elite (no matter the camp). What freedom-loving people want most is to shape their own destiny, though this is something mostly lost in narratives that present popular uprisings in binary terms.