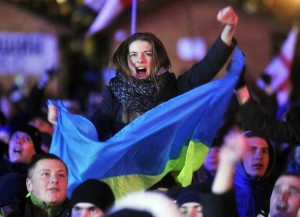 It is extremely disappointing that Popular Resistance deigned to publish an op-ed by Paul Craig Roberts, US and EU Are Paying Ukrainian Rioters and Protesters, in which he characterizes protesters as either paid shills or “gullible dupes.”

Only four days earlier, Popular Resistance published an insightful commentary from a group of Ukrainian academics decrying the shortsightedness of analysis that paints the uprising in monolithic and totalizing terms. In The Role of Extreme Right in Ukraine Protests, these academics point out that “by fundamentally discrediting one of the most impressive mass actions of civil disobedience in the history of Europe, such reports help to provide a pretext for Moscow’s political involvement, or, perhaps, even for a Russian military intervention into Ukraine.” The accusation from Roberts that the protesters are merely dupes is a somewhat different kind of totalizing claim, but nonetheless has the exact same result.

This is not an attempt on my part to excuse American hegemony, nor to deny the undeniable: the US has vested interests in the outcome of the standoff in Ukraine and certainly favors some political parties and groups over others. In such a situation, the US is obviously shaping a particular narrative and providing material support to particular groups, as is the EU, as is Russia. But the kind of vast conspiracy suggested by Roberts is patently nonsensical, myopic American-centrism, and moreover is insulting to the justifiably angry people of Ukraine, as if they couldn’t pull off a protest if it wasn’t for the CIA. He is essentially suggesting that the people in the country are merely listless, unorganized puppets, and, thus, their legitimate anger might be better served if they just went home, leaving their fate to those in the know (such as Roberts himself).

This is a stereotypically reactionary impulse: representing the multitude as a blind seething mass of anger that has been duped. This is not reflective of the complexity and nuance of cultures of resistance readers have come to expect from Popular Resistance. Are there serious concerns that this uprising, as with many uprisings before, may be turned to authoritarian ends, to the whims of empire, co-opted, subverted, bent to the will of the hegemon? Yes, of course. But is this a reason to grind into the dirt a significant expression of popular resistance?  No, and Popular Resistance (Popular Reaction?) should know better.